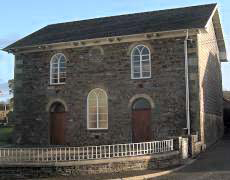 An independent chapel existed on the present Capel Nonnni site as early as 1810; it was called Capel Maesnonni and prior to that Capel Maesnonne. The present building was erected in 1838 and was completely renovated in 1962-63.

The travel diaries of Howel Harris (1714-73) record visits to Maesnonni and Waunifor as well as preaching meetings at Maesnonni between 1744 and 1762 when Harries visited the parish – and Maesnonni in particular – accompanied by Daniel Rowland of Llangeitho, the revivalist, and William Williams, Pantycelyn, the hymn writer.

Near Capel Nonni are the remains of Castell Nonni, a small motte and bailey built near an ancient ecclesiastical foundation.

On land belonging to Maesnonni, the inscribed Maesnonni stone was discovered by local amateur archaeologists; it is now conserved in Carmarthen Museum and is thought to belong to the 10th century.

The name HEUTREN is inscribed on the stone and although it is difficult to interpret the actual significance of the inscription per se, it represents an early and powerful icon in the long history of Llanllwni.